What constitutes harassment and how to handle a complaint

As per the Equality Act 2010, harassment and its associated behaviour relates to one or more of an employee’s protected characteristics, which are their: age; disability; gender reassignment; race; religion or belief; sex; or sexual orientation.

Under the Equality Act, there are three different types of harassment – so, let’s delve into each.

Type 1: when a victim is harassed against any of their protected characteristics, and the behaviour they’re subject to has an “adverse effect” by violating their dignity, or creating an intimidating, hostile, degrading, humiliating or offensive environment.

Type 2: when a victim is subject to unwanted behaviour of a sexual nature – this is essentially sexual harassment – which, as with type one, has an adverse effect.

Type 3: this is when a victim is faced with unwanted behaviour that’s either of a sexual nature or relates to their gender reassignment or sex. When the victim rejects or submits to the harasser’s behaviour, they’re treated less favourably as a result.

Similar to type one and two, the behaviour has an adverse effect on the employee.

Harassment at work can take place in many forms. A handful of examples include:

The Equality Act covers both employees and contract workers – which includes agency and casual workers.

Harassment victims don’t actually need to be covered by one of the protected characteristics to be protected – they just need to show that the behaviour was related to one of those characteristics, and that it had an adverse effect.

For example, an employee who has no religious persuasion receiving unpleasant comments because of their partner’s beliefs.

How do you know if it’s harassment?

In deciding whether or not behaviour constitutes harassment, a tribunal will take the following three points into consideration:

2. How the victim viewed the behaviour, and whether or not it’s reasonable of them to feel harassed.

3. Whether or not the alleged harasser intended for their behaviour to have an adverse effect.

How to handle a complaint

It’s important to have a clearly defined and communicated process in place for dealing with harassment complaints, so that all employees are treated equally and fairly.

Here’s our seven-step process to managing the initial conversation:

1. Take any complaints you receive seriously, and make a point of reassuring the employee that it’ll be thoroughly investigated.

2. Ask the employee how they would like their complaint to be handled. If you can, try to align your process with their wishes.

3. While remaining sensitive to the situation, encourage the employee to go into as much detail as possible.

4. Make sure you’re supportive throughout. You should never dismiss the employee or accuse them of being oversensitive.

5. Handle the complaint confidentially, and make sure the employee in question knows this will be the case.

6. Try to avoid asking the employee to repeatedly recall the events – this could be very distressing for them. Make notes during your first conversation and only revisit the incident(s) if you absolutely have to.

7. If a manager’s involved with the harassment complaint in any way, then it should be passed onto a more senior manager – that isn’t implicated.

After you’ve received the harassment complaint, it’s time to decide on the next steps. Below is a summary of the various stages you’ll need to follow.

Important: to ensure you’re handling the complaint appropriately and aren’t at risk of any form of negative backlash, you should always seek legal advice for support specific to your situation.

Failure to follow the correct course of action could result in:

It’s worth noting that if a claim under the Protection from Harassment Act 1997 is brought against you, you could face potentially unlimited fines. 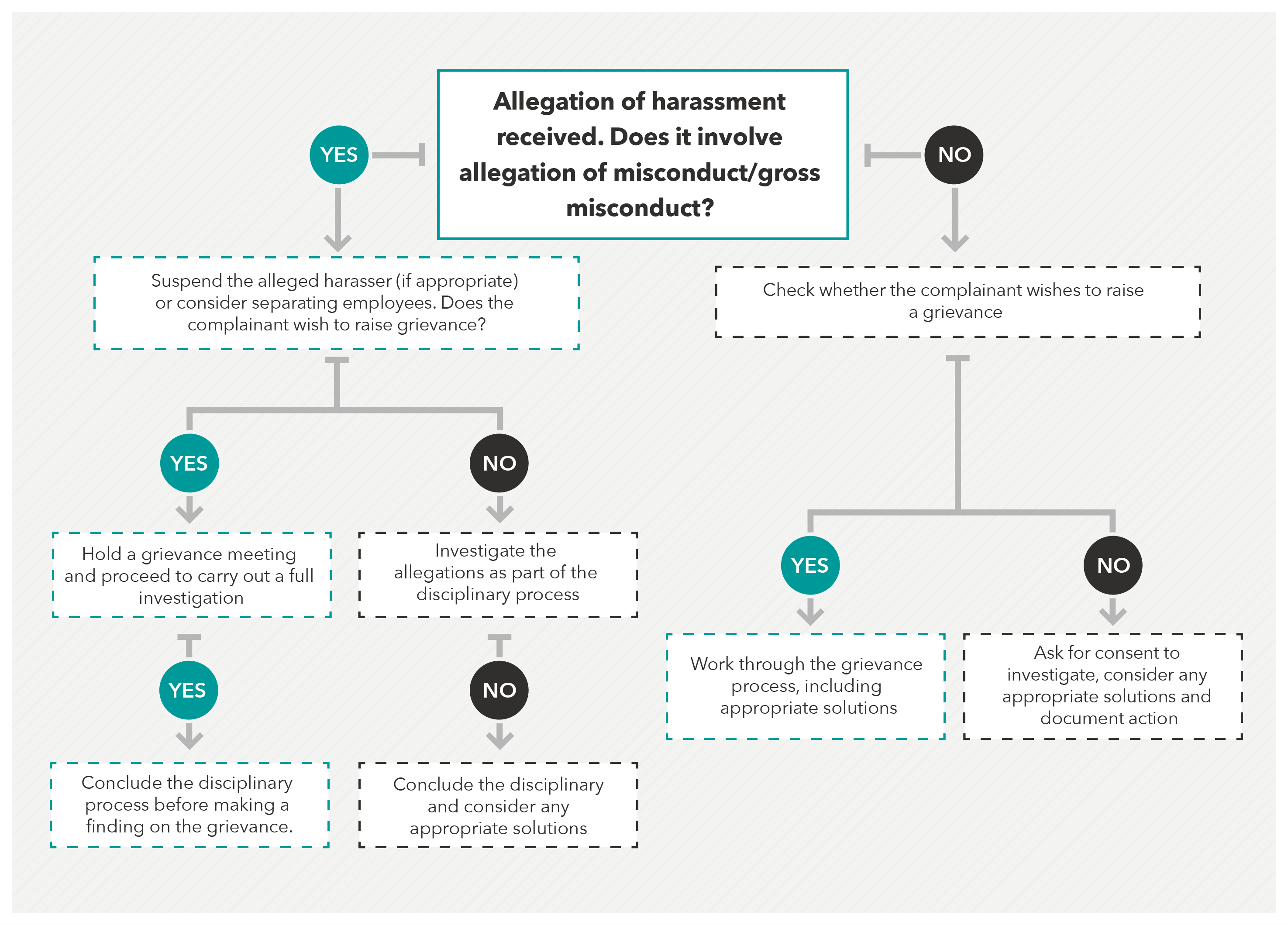 For more information on handling harassment complaints – the right way, get in touch with our HR & Employment Law experts on 0345 844 1111 or hello@citation.co.uk.

And if you’re a Citation client, remember, we’re available 24/7 with our advice line.